You'd be surprised what one learns studying Chelish law.

Youngest child of a family in one of House Von Wundras’s branch houses, Leandra Agresti is the black sheep of her family. She’s a good, decent human being. Raised amidst the extravagance cruelty of Chelish nobility Leandra decided that she wanted to change Cheliax for the better. She decided she would become a lawyer to try to effect change in the Chelish legal system from the inside. This worked about as well as you would imagine, and she soon found herself burned out and frustrated. Then she met Rizzardo when she caught him trying to use falsified ownership papers to smuggle halfling slaves to freedom. He was clearly in need of a contract law consultation, so she decided to join him in his efforts. When a Tiefling accountant she knew asked for a legal consultation on behalf of his sister in law Leandra learned about The Avengers of Westcrown. She joined the group and promptly pulled Rizzardo in with her. 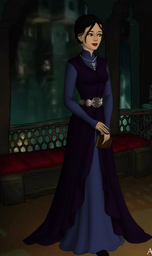